Pakistan’s most credible journalists recognized for their work at the annual AGAHI Awards 2018 in more than 40 categories. 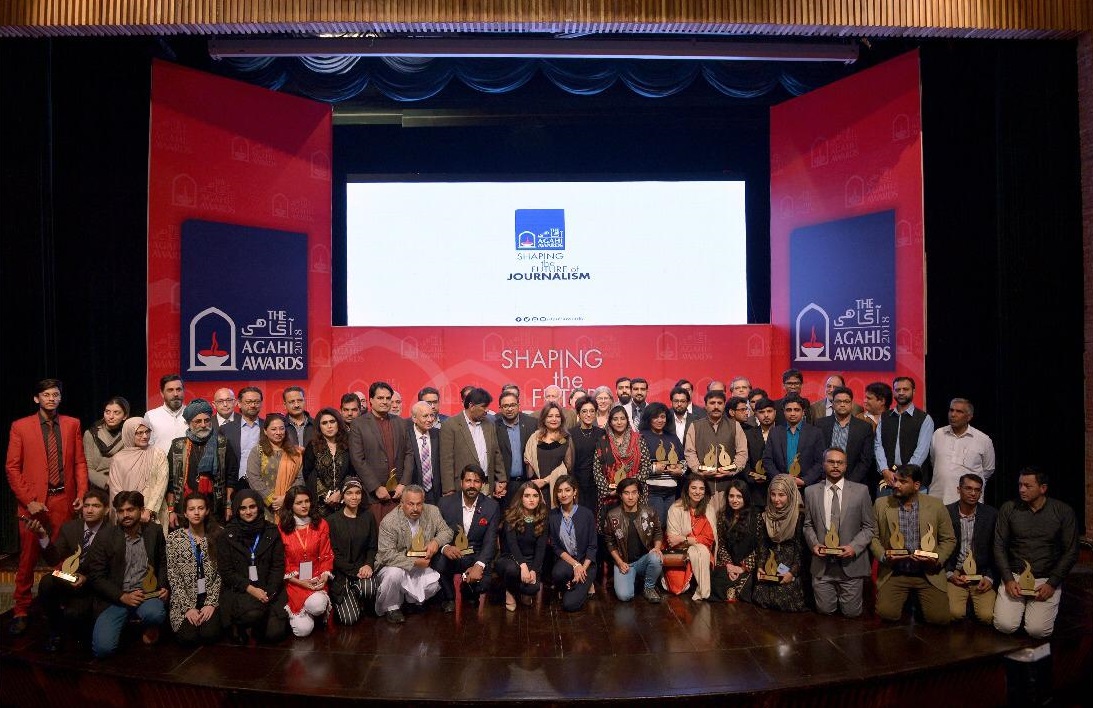 Islamabad, PK – 9 December 2018 – The AGAHI Awards recognizes the efforts of journalists and the media community every year. The best of the media industry striving for ethical and responsible journalism from all across Pakistan were recognized as Journalists of the Year in their respective categories today at the Pakistan National Council of Arts (PNCA) in Islamabad.

This year AGAHI Awards is celebrating dignity for all. Puruesh Chaudhary, President AGAHI and the co-Founder of the AGAHI Awards said, “Ethical and quality journalism plays a crucial role in enhancing the collective consciousness of the society contributing towards a nation’s identity.”

The AGAHI Awards acknowledges journalists’ professional commitment to safeguarding public interestsby promoting free, responsible and democratic utilization of the media. The objective of AGAHI Awards is to recognize and appreciate the best journalistic practices in Pakistan, creating a healthy competition within the community, encouraging ethical and professional reporting.

The ceremony was hosted by Tanzeela Mazhar and Shahzad Nawaz. This year AGAHI Awards received more than 2000 nominations from all over the country in 40 different categories from print, television, radio and online media. The AGAHI Awards received an overwhelming response from the journalists’ community – reaching more than 6 million Pakistanis through social mediaand almost 1 million through SMS for the Peoples’ Choice Award categories: “Favorite News Channel of the Year” and “Current Affairs Anchors of the Year” in Pakistan. Big data and sentiments analysis were deployed to measure the responses for the People’s Choice Award Categories.

Pakistan State Oil (PSO), the leading oil marketing company of Pakistan, has been actively supporting the cause of journalistic integrity as the principal sponsor for AGHAI Awards 2018. Talking about role of the company as a responsible corporate citizen, Imran Rana, Deputy General Manager Customer Services, Communications & CSR, PSO, said, “Using the scale of operations and its countrywide network PSO actively supports development of the society and its members. The company positively impacts and changes lives of millions through its contribution in the field of education, healthcare, community development and environment. At PSO we believe that recognizing and rewarding excellence in journalism is vital. We congratulate all winners and extend facilitations to the AGAHI Awards for promoting diversity and best practices in the field of journalism”.

AGAHI Awards recognizes the content across various media platforms; be it print, broadcast or digital, promoting socio-cultural values, prosperity and dignity for all. “In a world of rapidly changing dynamics especially in the media industry, AGAHI Awards prides itself on recognizing the best journalism practices. Many of the AGAHI Awards winners’ are now in decision-making and leadership positions across the industry for ‘Shaping the Future of Journalism’, and furthering the cause of Dignity for All,” said Amir Jahangir, co-founder of the AGAHI Awards and CEO Mishal Pakistan.

AGAHI Awards recognizes ‘Dignity for All’ as the key currency for public trust in this evolving attention economy, where media becomes the platform to promote social values. AGAHI Awards is the recognition of journalists who have shown personal integrity and professional excellence to make Pakistan a more informed nation.

“Water and Nutrition are very important issues which need to be highlighted in media,” said Waqar Ahmad, Head of Corporate Affairs, Nestle Pakistan. “We, at Nestle Pakistan have taken a lead to promote water stewardship locally. We are also committed to addressing the grave challenge of hidden hunger. By partnering with Agahi awards in the categories of Water Stewardship and Hidden Hunger, we would like to recognize journalists who have raised and identified these key issues being faced by Pakistan.”

AGAHI and Mishal in collaboration with multiple stakeholders jointly nominate national and international leading opinion-makers, development experts, media gurus and knowledge professionals to be part of the judges’ panel to evaluate the entries.

In the People’s Choice Awards the following are the winners for 2018:

The Founders’ Choice Awards in the two categories were given to:

Safee Shah, General Managar – Uber Pakistan, said, “I would like to congratulate this year’s winners of AGAHI Awards. Platforms like these are imperative in recognizing the professional and credible journalism needed in today’s age of digital media. This is why innovating along with the world has become a must for our media, as we need to ensure that the right, credible voices are being heard by the masses at all times.”

The cause of journalistic integrity is furthered by the AGAHI Awards, which are sponsored by many reputed organizations that believe in the cause of promoting ethical and professional journalism. This year’s partnership included Nestle Pakistan, Uber, National Fertilizer Corporation, Flair and the Pakistan State Oil (PSO).

“National Fertilizer Corporation (NFC) plays an important role in educating and facilitating farmers across the country. It is for this very reason that it gives me great pleasure to be a part of an initiative that serves to educate, inform and raise awareness,” said Omar Saeed, Chief Executive Officer of NFC. “AGAHI Awards’ contribution is hence, vital in providing an environment conductive for teaching and learning.”

Inaugurated on March 28th, 2012, the AGAHI Awards are Pakistan’s first ever journalism awards recognizing the best journalists in more than 40 different journalism thematic areas. Through this initiative, AGAHI and Mishal Pakistan, in collaboration with leading press clubs across the country, local and international media development bodies, academia, regulatory authorities and the private sector, have been playing an instrumental role in promoting content diversity.

The AGAHI Awards are the most sought-after journalism recognition in Pakistan. The Awards have been the foremost development initiative for the journalist community in the country, and have identified some of the most talented and diligent journalists in the industry.

The AGAHI Awards were co-founded by AGAHI and Mishal Pakistan. The evaluation methodology and selection criteria of the awards have been designed in collaboration with the Center for Internet and Media Ethics (CIME) and on the pillars of Media Development Indicators of UNESCO, with input from the UNESCO headquarters in Paris.

Mishal Pakistan is the Country Partner Institute of the Future of Economic Progress System Initiative of the World Economic Forum. Established in 2003, Mishal has been engaged with key stakeholders in Pakistan to improve the state of media, competitiveness and public policy strengthening through multiple good governance initiatives.

AGAHI is a social enterprise established in 2011. Its primary function is to create non-paid communication strategies, content intelligence structures, development collaterals and tools for diverse sectors and organizations. AGAHI in association with several leading national and international partners focuses on creating shared spaces for interactive learning, collaborative thinking, and knowledge sharing. It is at the forefront of devising foresight research and future scenarios work in Pakistan.